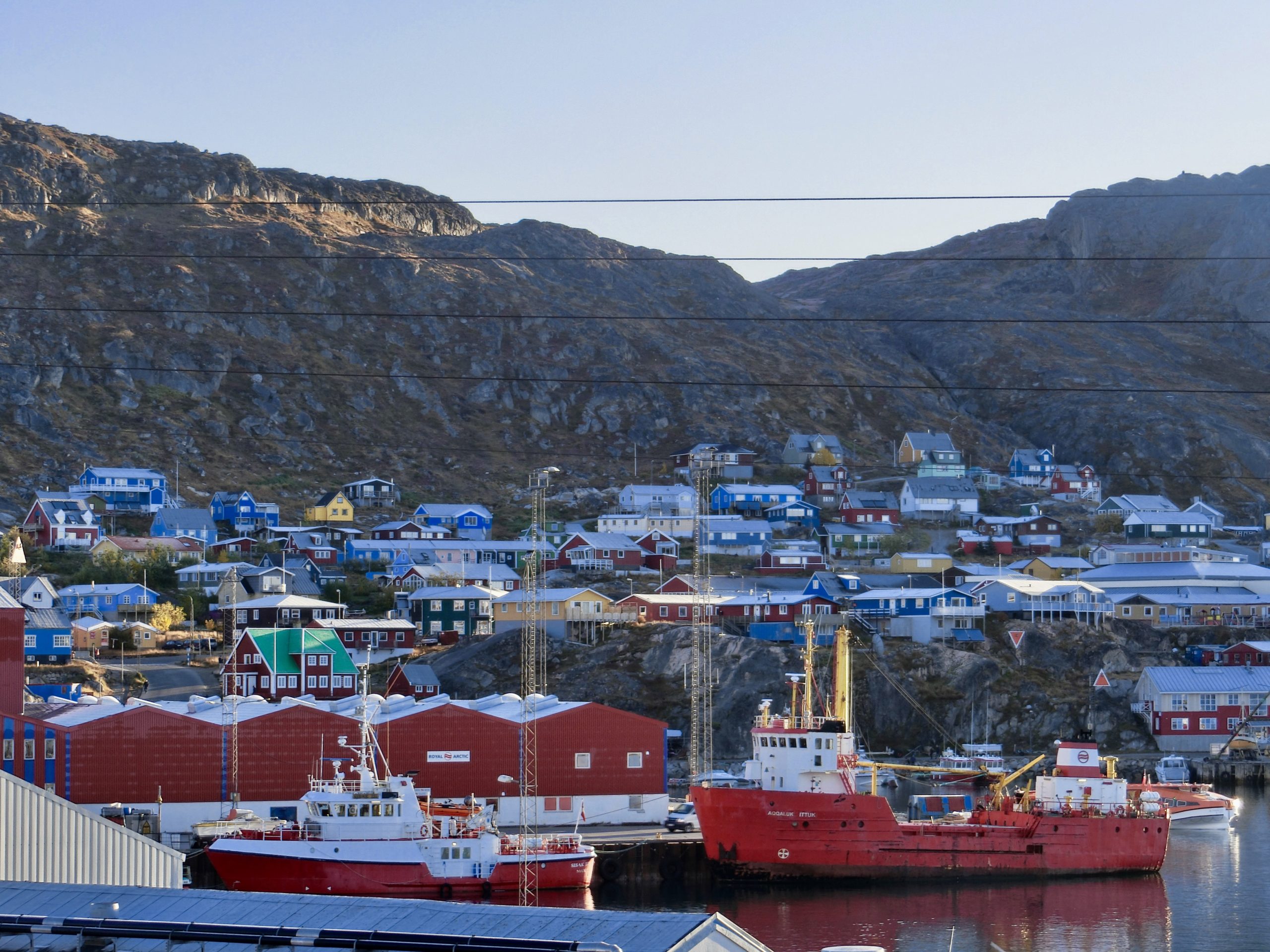 Today we went ashore at Qaqortoq, Greenland in tenders. The sea was calm and welcoming.

Qaqortoq is a small berg, town or village.

It sits in Qaqortoq Harbor and is situated on a group of small, rocky hills over looking Davis Straight.

The harbor is tucked in among these rocky hills and protected to some degree from the fierce storms that pass here. It is a pleasant cove filled with many different sizes and types of fishing vessels. The population is around 3089 people.

The area is a wonderland for photographers.

We walked the small town on our own for an hour or so before we had to be at a meeting point for the tour of the fur production company.

We eventually came across what we thought was the “love bench” which turned out not to be the case. It is a large carved boulder with places for three people to sit. If you were a good hunter and able to take care of more than one wife and several children, you were allowed to have more than one wife. But we didn’t know that at the time.

On that subject, let me mention Toni. My wife and I had thought we had found the bench and took a picture there. Toni, a mild mannered woman from Indiana was sitting on what we thought was the bench. My wife took a photo of Toni and I in front of what we thought was the “Love Bench.” It was not, but we got to meet Toni. I hope she found the real bench later as we did, and I hope she had a pleasant vacation.

Our young guide was on her first tour. She was starting her new adventure into the tourism industry. She was very pleasant and capable. The tour of the plant was very interesting.

The seal skins arrive here from several areas nearby soaking in vats of liquid and go through several processes before they are sold and shipped out.

Initially the fat is scrapped off of the skin. Too much fat can cause the skins to change colors and it becomes less valuable and may have to be dyed.

The skins soak in water laced with soda ash and salt, among other things, to make the skins soft and pliable. They are then run through giant tumble dryers.

They are then steam pressed so the fur or hair all run in the same direction and are then inspected. They are placed in different piles based on their color and fur quality.

The Inuit are allowed to hunt seals and sell their furs here in town. Sometimes, sled dogs are skinned when they die and the furs are sold her also.

A fee can be paid to hunt Polar Bears if you are of such a mind. The furs are treated here as well, but for some reason the feet must remain attached.

We saw two or three Polar Bear skins while we were here.

Wether you like the idea of hunting and skinning these animals, this is their livelihood and they do eat the meat of the seals as well. Different varieties of seal have different flavors. The meat is often black.

Try to remember we are talking about a different world here before you pass judgment. We eat little animals called cows and steers, among others. We are removed from the live animals for the most part and don’t see our food as having been alive, yesterday.

Granted, they are not as cute as seals, but should these people starve because you think that their food is cute?

There are few jobs here other than fishing and hunting.

It is interesting that fishing is fine with most people but killing and eating seals is different. Why? Fish are just as alive as seals, and remember, they eat other fish.

Seal hunting is off the table because they are cute?

It’s easy to point fingers at others when you don’t have to hunt the food animals that you eat. Every time you eat a burger or a steak, some animal died for that. Im alright with that.

You might have different views. That’s alright, but don’t try and make me eat tofu because you don’t like meat for some reason.

We in most of the United States live in a different environment for the most part, large cities. We have little understanding of different cultural needs and wants. Many of us think that we have all the answers and everyone should live and think like we do.

Let’s get real and try to see the world through the eyes of the differing needs of others. I’m done.

This little place is very colorful, with it’s brightly painted buildings made of corrugated steel. Some of the buildings are on stilts to remind us of the snow that will be here soon enough.

The summers are short and the winters are long here, high up in the northern latitudes.