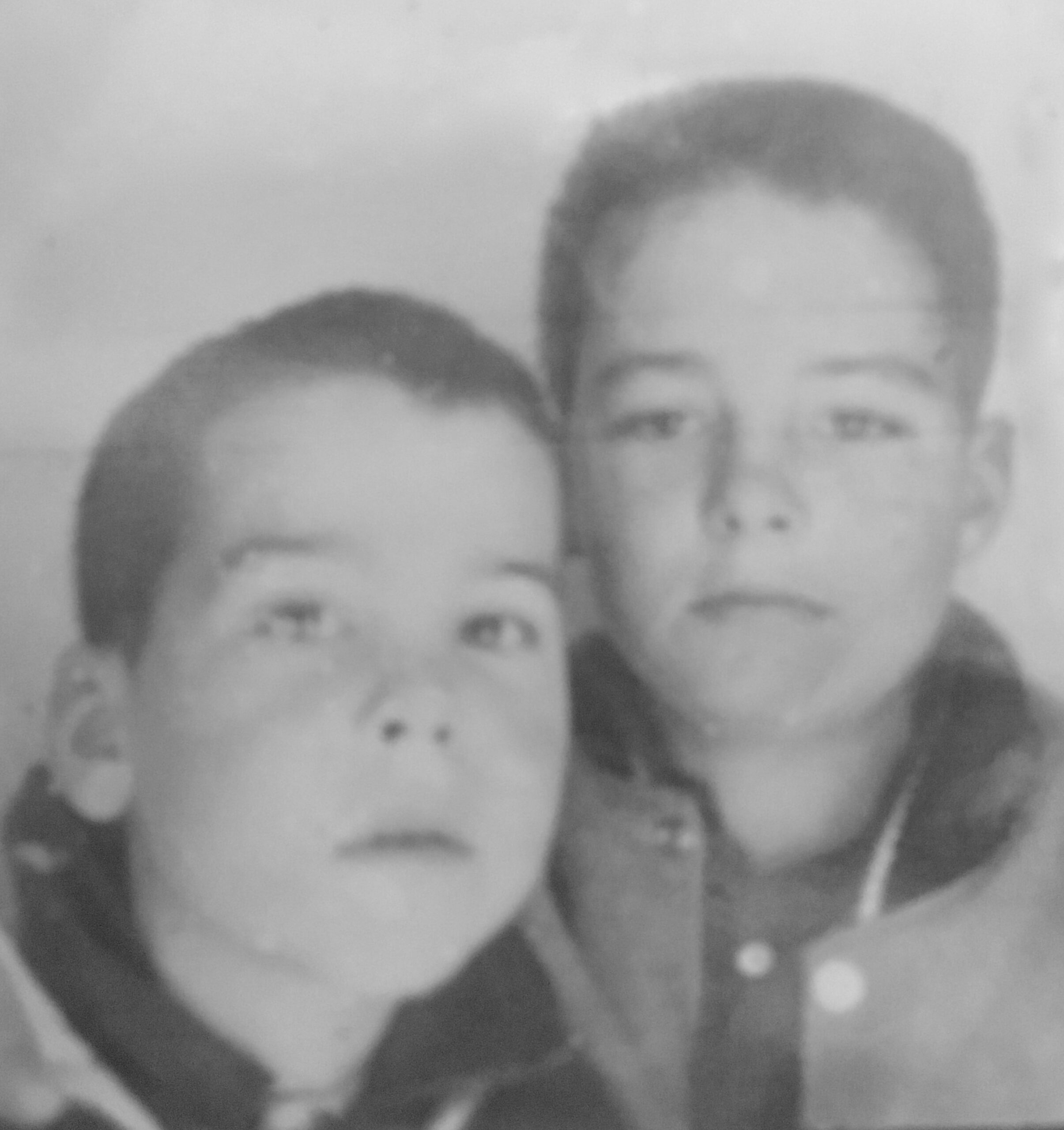 My parents bought their first modest home when I was around seven or eight years old.

Before that we lived in a mobile home and traveled around California and Nevada while my father lathed and plastered military housing and the new tracts of homes being built after World War Two. We all lived in a thirty five foot trailer. My mother, father, myself and my brother who was six years older than I.

My father’s last union job was plastering Disneyland in Anaheim, Ca. He did keep up his dues after that last job and at one time had one of the longest held cards in his union.

When he saw that the Disney job was coming to an end he started looking for more work for himself. He found a large combination bar, dance hall and restaurant that needed to be plastered in his search for work.

He somehow tracked down the owner of the building and gave his pitch to the man to no avail. The building was vacant and the owner saw no need to fix it if he had no income coming from it. That is how my father ended up leasing the building instead. My father was afraid of little, as I would learn often, later in life.

I can vividly remember our trailer being parked in the dirt parking lot out behind the restaurant and me climbing down those steps for my daily adventure. I was five or so. It would have been in 1957.

My life was consumed with insets and all things below me in the dirt and close at hand at that time. I was an adventurous child and lived in a wonderland of giant weeds, stray dogs, an apricot tree which I climbed often and ate the fruit from. The many neighbors who were of a different color, ancestry and culture than myself, knew me well.

The trailer was soon sold and the proceeds were used to fill the new restaurant with food and beverages of all types. We moved into an out building for several months until the roof caved in. We then moved into the restaurant, itself, but that is another story for another time.

After a long amount of time had passed our newly constructed home was purchased and the permanence that a real home can create was finally created for our family. I had already had lived in many different circumstances and places. I understood even then that good circumstances may be fleeting or temporary, and that those improved circumstances should be enjoyed while they lasted, to say the least.

My parents were always at work doing something at their new endeavor and I was often at their side working when not in school. As the years passed, I washed mountains of dishes, cut meat for stews and swept many floors. My brother was my main care taker and custodian when they were too busy to watch me. I was a handful, no doubt.

This is the part of the story that I told on stage.

When I was around seven or so I began to understand what Halloween was. My parents had large dances with live bands of all sorts on most holidays and so would not be available for the Halloween or most other holiday festivities with my brother and I. No problem, my brother had a plan that would keep us entertained this particular year.

First of all, he took me out with him in our costumes to do one foray into the neighborhood at my mother’s request. She was gone but had left firm instructions, as usual. That went well and according to plan. Then he sent me out in his costume once more for a second load of loot. Some adults seemed suspicious of me and perhaps remembered my voice as I asked “Trick or Treat” with enthusiasm, once more.

“Haven’t you been by here once before son?” “No sir, I don’t think so sir. How and why would that happen sir? Do you have any more of those Abba Zaba bars sir?” Ops.

Once we had filled our war chest with candy, the real fun was about to start. Remember, I was seven or so and my brother was about twelve.

We had chicken pot pies or Swanson’s TV dinners to eat as usual that night.

There was a large rubber tree next to our front door which was recessed and in the dark. It was strong and covered in giant green leaves that looked almost artificial. My brother fastened the garden hose with an adjustable nozzle on it at just the right height and angle to hit the little unsuspecting children as they approacehed the door. The nozzle was adjusted to a thick hard stream. Perfect.

The hose was then run through the house and out the back door. It was attached to the rear faucet and a long string was run from the front door to the back faucet with a piece of tin foil hanging from it. That foil made a slight noise when the string was pulled. That was to be my job.

A chair was set at the front window by the door in the dark. That was to be my perch or station for this adventure. I simply had to pull the string when the targets were in the right position. Simple.

My brother filled several colorful, round balloons with water and placed them in the dish rack and carried that on to the rear patio just next to the faucet. We were ready. Ready for what you might ask. “War” would be my brothers quick response.

I then sat in the chair by the front door and was told to pull the string when the unsuspecting kids would be in the line of fire from the hose. It was an easy task to line up the hose with the arriving hordes of small children even for one as young as I. Never give a weapon to six year old, by the way. They will quickly learn how to use it and it soon becomes a part of them. I know this from personal experience.

As the first child approached, I was terrified and filled with the sense of power at the same instance. I pulled the string. I was only following orders.

As the child approached, his mask was quickly blown off and his face which was then blasted with a thick and powerful stream of water. I was delighted and scared to death in the same instance.

I can still see that clown mask flying through the night air and the water splashing all over the poor kids face and onto the others standing around him. Soon they were all wet and highly surprised.

It was a wonderful and clever Halloween prank, to say the least. Children ran in all directions in a panic. Oh, the joys of this thing called Halloween.

The parents were soon screaming at our pitch black house and suggesting loudly that the police might soon arrive. I was terrified and delighted in the same moment. But that was just the prelude to the evenings festivities.

As the children ran the for the cover of their parents in groups and herds and the parents screamed and shouted at our house from the distant sidewalk, several water balloons came flying over the roof in a low arch and with great accuracy. It was a water balloon mortar attack.

There was no boom of warning like from cannon shot. My brother had a good arm and very little if any conscience at that time. That has changed over the intervening years, I believe.

The adults were soon dodging water balloons with little success and trying to retreat to a safer and more distant range and decide on a counter attack of some sort, if possible.

That is when the threats began. As we know, threats are just that and have no real value in most cases of this type.

Our parents knew nothing of this and were working like dogs just a few miles away selling rivers of beer to the merry makers who thought that dancing and drinking the night way was a good Halloween night’s entertainment.

I was terrified of course. Even I could see that some dark consequences might be coming our way in the near future. My brother was not concerned.

I saw the next morning in front of me in my mind’s eye at the very moment of this conflict and it was not a pretty sight. It was filled with angry parents and police cars lining our street. Who wouldn’t be mad after a night of such mayhem and fun. My brother, for one.

“It’s Halloween little brother and this is what Halloween is all about. It’s about loads of candy and innocent pranks played upon those not sharp enough to see them coming.”

Interestingly no one ever came to complain to my parents about the nights strange activities at our house as far as I know. There was no price to be paid by my brother or myself, thankfully.

I think this only happened once, but I surely think that a message had been sent to the neighborhood about our house and those who lived in it. I’m sure it was seen very differently after that Halloween night.

Oh, by the way, this is the story I told to win the Long Beach Searches for the Greatest Storyteller.

I am the lucky fellow in the middle of these very attractive ladies.