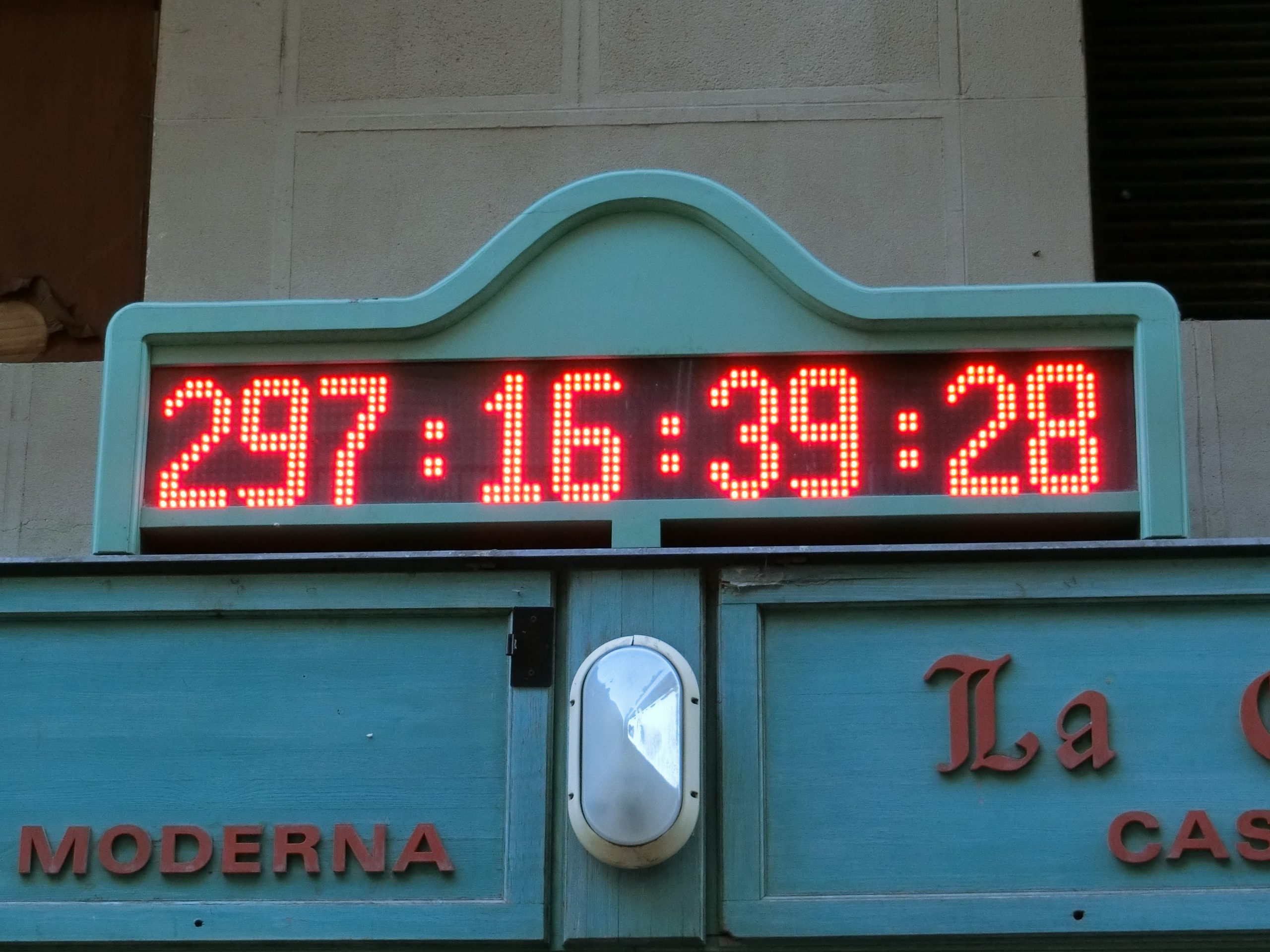 We rode the bus for forty five minutes out to Roncesvalles. It is the site of the defeat of my distant grandfather, Charlemagne.

We walked on the pilgrimage route to Santiago de Compostela for a few miles. Our tour through Spain and Portugal follows the route closely. The weather is perfect. We are very close to the border of France at this point in our travels.

The bones of St. James as supposed to be in or under the Cathedral here. They were found by a hermit living in a cave here hundreds of years ago. That is the story at least. The people doing the the walk on the trail often wear scallop shells on their backpacks. The trail is marked with them on signs and with brass shells laid in the concrete along the trail.

Baptismal fonts and the container of water holding the water to be poured over the head of the person being baptized is shaped like a scallop shell as well. The scallop shell is the symbol for the Apostle St.James.

The way of St. James is a series of trails from Spain, Portugal and other countries that lead to this Cathedral. Many Catholics do the trip at least once in their life time.

We walked just a couple of miles through the trees and in fine weather. It isn’t always like this for the people who take the long and arduous trek. It was an easy and beautiful downhill walk for us.

We had a fine lunch along the way on our bus journey. It was fish and pork, of course. If you plan on coming this way and you don’t like fish or pork, bring some protein bars along as we did. I am very fortunate as I and can eat most food items as well as the container they come in.

We took a walking tour of Pamplona when we arrived.

We followed the short path of “the running of the bulls” route from the unloading pens in the market and up to the bull ring. It is an interesting story and cultural event.

We saw the veranda of the room where Hemming way sat and looked down on the run, so many years ago. Not much has changed here since then.

Remember that other countries have different ideas and ways of doing things and you will be fine.

Yes, they have bullfights and kill most of the bulls. Do you eat meat? At least these bulls get a chance to fight for their lives before they are killed unlike most countries that just kill and eat them.

Which is better? I ‘m not sure. They are just different.

Cows or Oxen make this run each year and lead the bulls on their path to the arena and their final destination. This has been going on since the 13th century.

The “encierro” or bull run is short and has a few sharp turns over narrow cobblestone streets. Many bulls slip and fall while making the turns but rise up and continue on their way. It must be a wild and exciting sight.

The cobblestones have holes in them where poles are set up with rope running through them as the bulls pass through the plaza along the way. It keeps the people back and away from the giant charging beasts.

Most of the human runners only run a short distance and know the route they will take and where their escape is going to take place. Some stop inside one the tight turns and let the bulls race past them.

Bulls run very fast and humans can’t out run them. The men look out for their exit behind a corner or under a fence along the way. Our city guide has done run several times and has lived to tell his tales. I may come back in a few years and run it when I am around seventy-five. I may not. Only time will tell if I become smarter or more adventurous.

We had a fine dinner of oxtail at La Olla just down the street from the large round arena after the tour was over. Remember, if everyone stopped eating meat, all pigs, chicken, lamb and beef would go extinct. They are not raised as pets and are simply a cash crop like beans and lettuce.

Try to think past your own desires and Ideology and try to understand how others think and feel. What a concept. One culture or idea isn’t always better than another.

There are some ideologies that we can almost all agree upon that are wrong or evil. But many are less black and white. Why should you control what others think or eat, simply because you have a differing idea? It is a futile battle to change peoples minds about most things at best, after all.

The photos will be up soon as will the other diary entries.