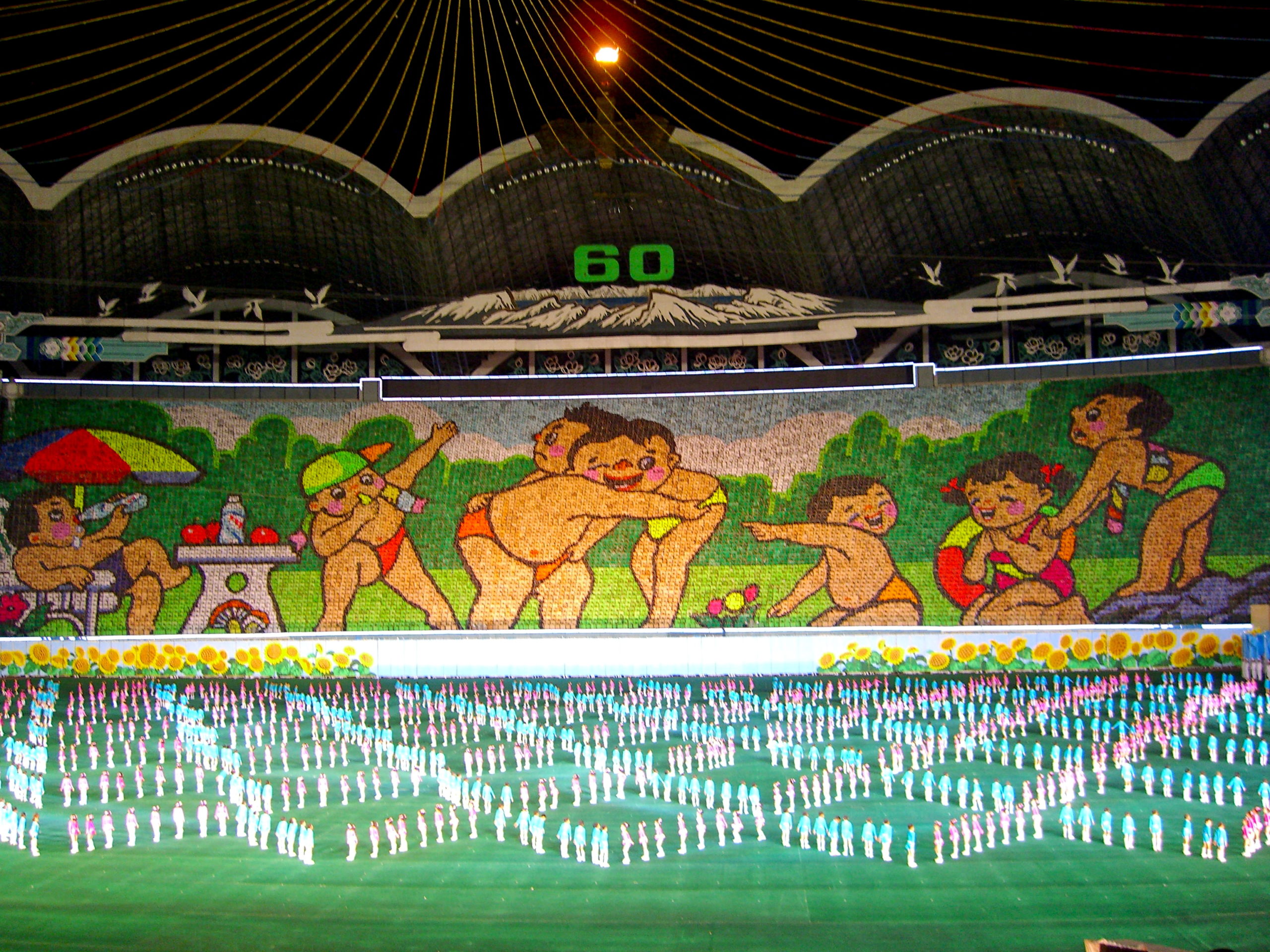 Photo: Remember that that picture of the children in the background is made up of thousands of people holding colored cards.

This is my last posting on North Korea. I mentioned the festival earlier, but I didn’t say enough about it.

First of all it is performed in the largest stadium in the world, or so we were told. The guests sit on one side across the large field of grass.

The opposite side of the stadium is filled with seated participants who are directed from ground level by human flag wavers. The seated participants hold large colored cards in their laps and display certain colors on orders of the flag holders standing below them.

Each person seated in the stands is a pixel. They form giant pictures across from us as the music changes. It is amazing. The capital was deserted looking until a few days before the games. Then people stared pouring into town and we could see them practicing in vacant fields all over town as we went on our tours.

There were children and adults. There were gymnasts on the field also. Thousands of them, or so it seemed. The field was huge. There was a high wire strung across the stadium, high above us, and a bicycle rider came across it and made us think he was going to fall. I think that there were fireworks in the background. If there wasn’t, there should have been. It was a special thing to see.

We sat in a special section at two large tables covered in green table cloths. We paid a fee for this show. It included bottled water. We were seated in an area where diplomats were seated also. There were people down in front of us from a few different countries.

How these people were made to do this I do not know. Were they paid, I doubt it. Were they coerced, perhaps, again I don’t know. I hope they weren’t. I hope they just wanted to show us some great North Korean culture. They succeeded in that.

I can’t tell you everything about what I saw. It was a few years ago. But if things go well over the next few years and you have a desire to go there, and it is safe, then I say go. You will not be disappointed. It is very different there, and that is a good thing. That is why we travel.

One important thing. Always be a good diplomate for your country. When you meet new people in different countries, behave respectfully. You are the one face of your culture and country that most of these people will ever come into contact with.

Always follow the laws and the rules, no matter how foreign they seem to you. You are a guest in someone’s homeland and you owe that to them. Besides, how wants to stay there longer than needed?