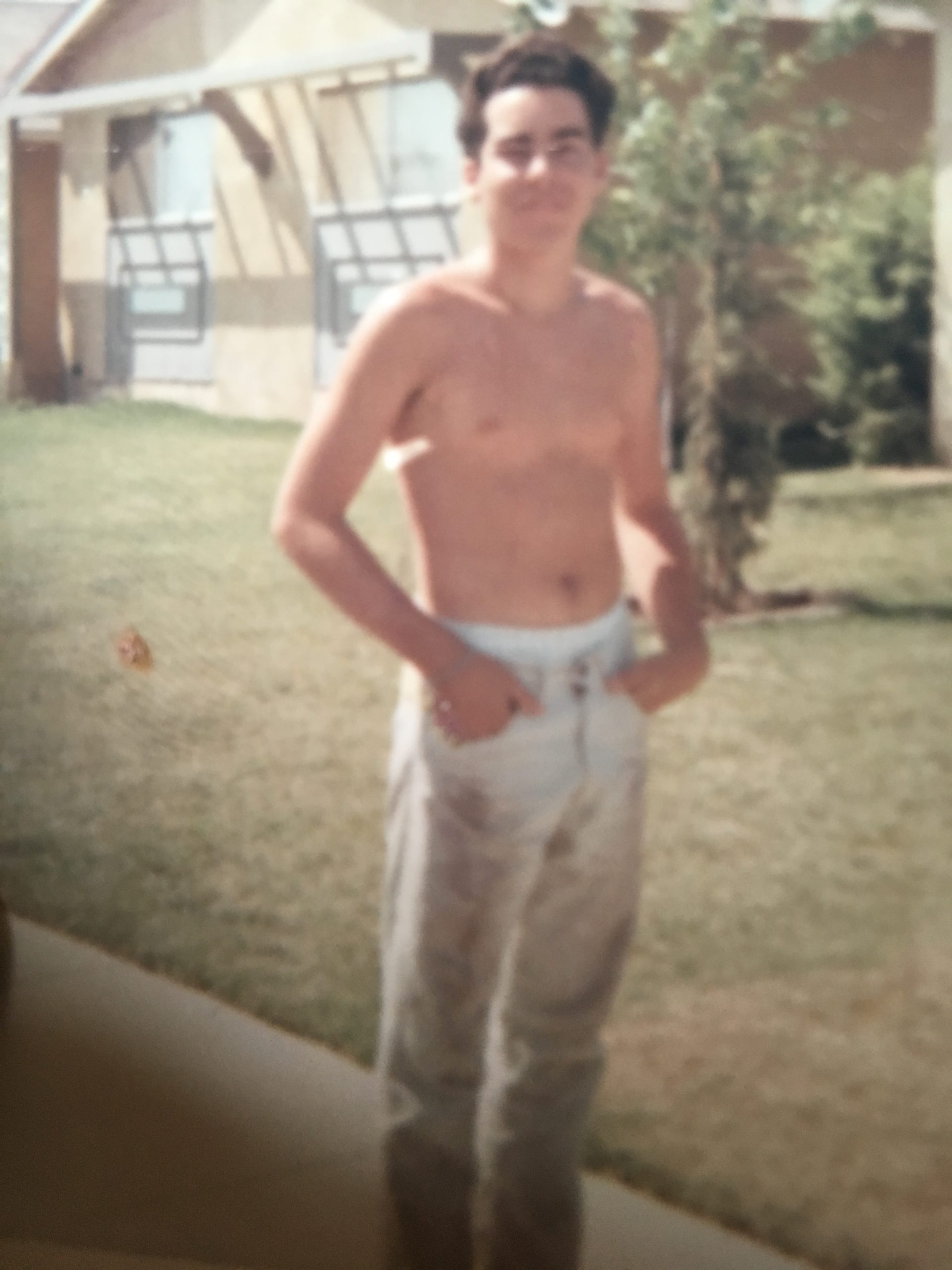 Photo: Note the dirty work pants. Already hard at it and just sixteen.

I was very fortunate to live an unconventional childhood. Many others have done the same and benefitted from that experience, I am sure.

When I was around six, my family took over a failed restaurant in a very large building in Southern California. It was in a predominantly Hispanic neighborhood. Thankfully my father and I could pass for being Hispanic. I guess that comes from the Romans being in the British Isles, where my family is from, long ago.

My days as a young child were filled with working in a commercial kitchen cutting meat, washing dishes, waiting on tables, shining shoes and cleaning a very large building with four public restrooms. Remember, this started when I was around eight and until I was thirteen.

We had that restaurant and for ten years and two others along with it for different lengths of time.

My entertainment was shooting pool and watching hard drinkers and drunks get into trouble.

I was shooting pool at around eight, when my eyes were finally above the wide, flat, green surface that I longed to play on.

It was my salvation from those unpleasant things happening around me. I only wish that I had all of those quarters in my hands now that I slid, so happily, into the welcoming mouths of those two tables.

I played many adults as a child and won now and then. I am no braggart, but I was pretty good as a youngster.

“Bars and pool halls and such are havens for the down and out and the criminal element,” some might say. You are partially correct if you believe that.

I, on the other hand, used it as a university of sorts.

I witnessed everything that you might imagine other than murder, by the age of twelve.

I started smoking very early in life. I quite smoking at twelve, by the way. That was one bad habit I acquired early, on this journey, and then set aside.

I wasn’t a perfect child. My mother made it very clear to myself and to my siblings what she expected from us. We complied.

I learned not to drink, not to be rude, and to be kind to everyone.

Most of my friends were adult criminals, but some were not without redeeming qualities. That is one thing that makes life interesting and difficult.

I was treated kindly by them for the most part and yet they would go out into the world and rob and pillage. That was their chosen profession.

Many went away for the obvious reasons and would return months or years later. Some learned their lessons and others, sadly, did not.

They are all long dead now, but they will never be forgotten.

Some of those people around me were good people, and I learned things from them as well.

Those lessons learned from them were not as stark, perhaps. They were good lessons but did not impress me as much as those from my “friends” from the other side of the tracks who I knew were “different.”

I guess my point is that one should be exposed to life in all of it’s grandeur, and as soon as possible. Those mistakes seen in front of me kept me from making them myself, later in life.

I saw people shooting Heroin, beating each other and their wives, drinking and driving and doing all sorts of foolish things. I learned from them and their behavior.

I learned not to emulate them but to use them as models of what not to become.

I do not smoke or drink or cavort with those who run amok. I thank my old role models for that.