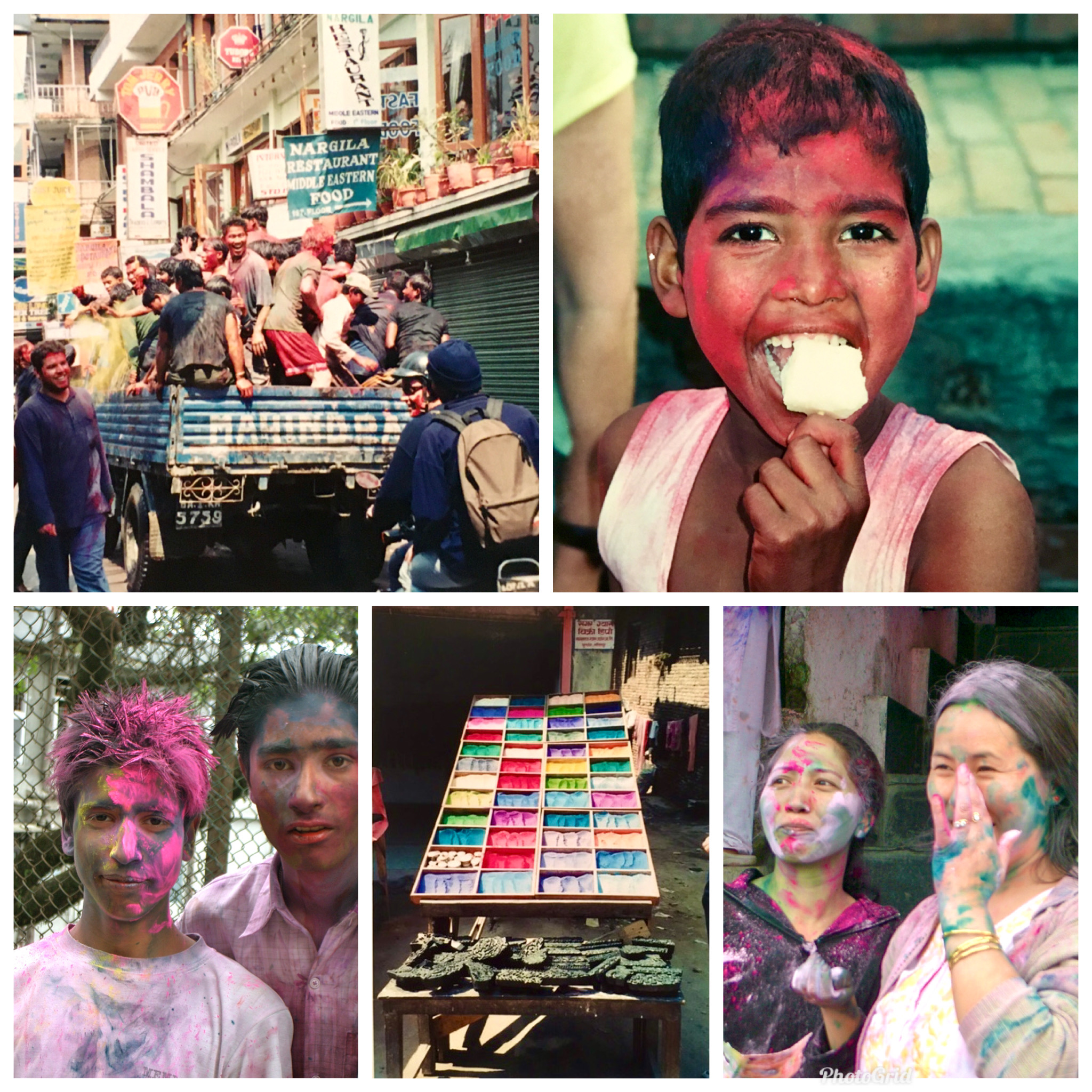 This photo above is of the celebration of Holi in India.

First of all, let me start out by saying that I take full responsibility for all of my actions at all times.

My parents were often far too busy to deal with me, a “hyperactive child” as I was growing up, and I was often left to my own devices.

The care and feeding of myself and my younger sister was left to my brother, who was just six years older than I.

Having said that, I also take credit where credit is due for some grand ideas. Some worked while others didn’t, but they were all grand.

The Wright brothers took a few missteps before they sailed up into the wind and history.

I am no different. “Fail and try again,” is my motto.

My brother came up with a few wild ideas as well. Where do I start. Hum. Okay, here we go.

One day my friends mother gave him the funds for a haircut. He was to walk to the barber and get it done while she was busy with other matters. Simple enough.

However, I and my best friend Tom, were avid model builders and decided that the money he had in his hot little hand was just the right amount for another beautiful car model.

We did the math and It all worked out, nicely. A public education is a wonderful thing, or used to be.

Tom’s lovely mother left for work or the market and we soon found ourselves alone in his house. We eventually came a cross a pair of scissors after some difficult and interesting searching. It took forever.

It is amazing at what a couple of young boys can find in his best friends parents bedroom and bathroom.

I mention this just a a reminder. Yes, they are snooping.

So anyway, I did the best imitation of a barber that I could. I combed and cut and combed and sliced and combed some more. It looked great to us. He had fine straight hair and I made for an easy job of it. Who knew what talents I possessed at such a tender age.

I took my time and gave a fine haircut to my best buddy. We then went off to the hobby shop on our bikes and found our newest project sitting within, easy reach.

The man looked at us strangely, but we thought it was because we had so much money. It might have been Tom’s haircut, however, now that I think about it.

It was nice but not perfect, shall we say.

We bought the wonderful object of our desires and came home to put it together. We went up to his room and proceeded with our task. it was beautiful, when finished.

That’s where the plan started to fail. Or that is where we noticed the plan had some drawbacks.

First of all, I suppose there was some loose hair lying about at his house and no explaining was going to make that go away. We had done an eight year old’s cleanup and that does leave some things less than perfect and visible to the trained eye of a mother.

Then Tom’s mother arrived home and things went downhill rapidly, from there. I excused myself quickly and hit the road.

Sorry Tom, every man for himself now.

Of course the house probably looked like a tornado had gone through it, twice. We were boys after all and not so finicky as a mother might be as far as clean up.

The real giveaway, of course, was my friends hair cut. She noticed it after she had seen the house and regained her composure. It is interesting what can set a mother or woman for that matter off, isn’t it?

I was a novice at best in the barber’s arena and their might have been a few miss guided cuts and slashes to Tom’s hair. It is best to leave these highly technical jobs to the professionals, of course.

I realize that now. I do apologize. I was just a young waif and knew no better at the time. I now see the error of my ways, some sixty years later.

I suppose my mother received a phone call from my friends mother.

It is all a blur to me at this late date. I do not recall a beating or a meal held back for my bad behavior, but perhaps both of those things did happen and I have put those unpleasant events out of my memory.

I only mention this event to remind those of you out there who happen to be parents, that your child or children are smarter and more devious than you might think.

That is why you never give a loaded gun to an eight year old without proper supervision.

That’s how we did it at our house anyway. One must be carful. That reminds me of another story, but I will leave that for tomorrow.

These are a few of my friends doing what children will do if given the chance.